The bog turtle (Glyptemys muhlenbergii) is North America’s smallest turtle species. Bog turtles are characterized by their small size, dark coloration, and large yellow to orange blotches on both sides of the head. Shell lengths of bog turtles average between 3 and 4 inches, and the largest bog turtle ever recorded was 4.5 inches. 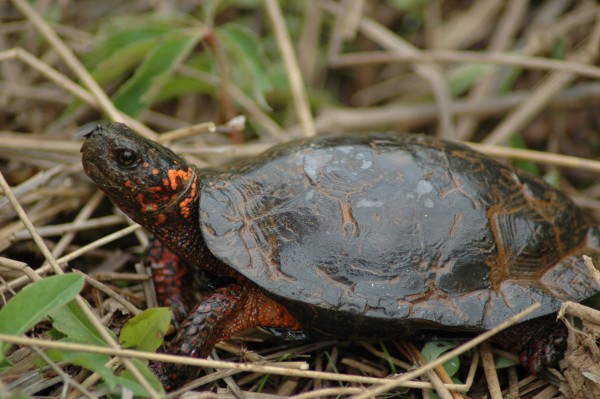 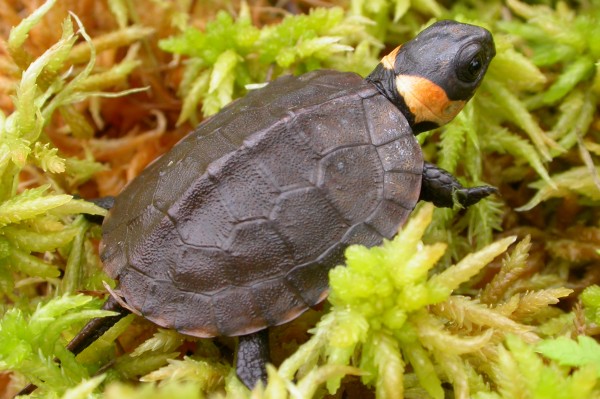 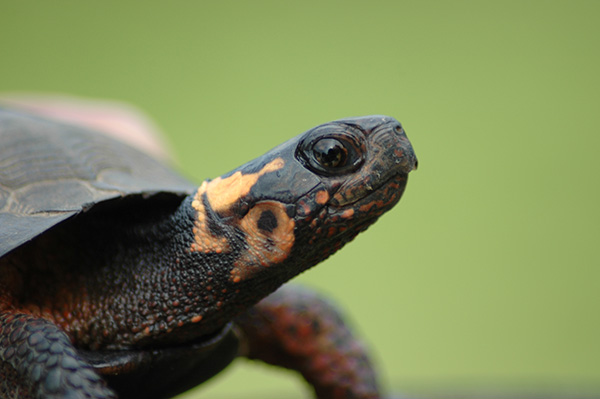 The main identifying character of bog turtles is the brightly colored blotch located behind the eye on each side of the head. These blotches vary in coloration from yellow, yellow-orange, orange, and orange-red from population to population. Turtles with yellow or orange blotches may be found within the same population and in some sites the turtles’ head blotches may be only yellow or orange. The size and shape of the blotches also vary from population to population and are dependent on the turtle’s age. Juvenile and newly hatched bog turtles possess large blotches that are light in coloration, whereas older adults have brighter and more intensely colored blotches that are usually diffused with darker pigment and are often broken up and incomplete.

The upper shell or carapace is usually black to mahogany-brown and may be marked with lighter whitish to yellowish sunburst rays of color in the individual scutes. The lower shell, or plastron, is usually black with varying amounts of white or pale yellow patches. The neck, limbs, and tail are very dark brown or black, with or without streaks of red or orange.

Sexual dimorphism is pronounced in this species. Unlike many other turtles, the males are larger than females and possess larger, more robust heads. Carapace lengths average 3.5 to 4 inches in males, while females are slightly smaller with an average of 3 to 3.75 inches in length. Females have greater carapace width to length ratios and shell heights than males. The rear marginal scutes are usually flared in males giving them a more streamlined appearance from above, while female bog turtles appear more circular. The plastron is dished out or concave in males and is flat in females. Male bog turtles have long, thick tails with the anal (cloacal) opening extending past the edge of the plastron, and females have short tails with the cloacal opening inside the plastron edge. 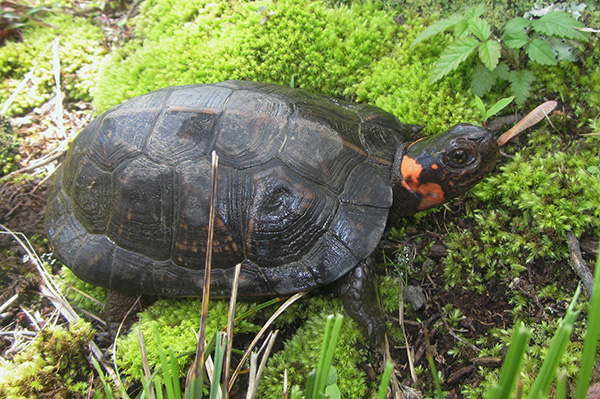 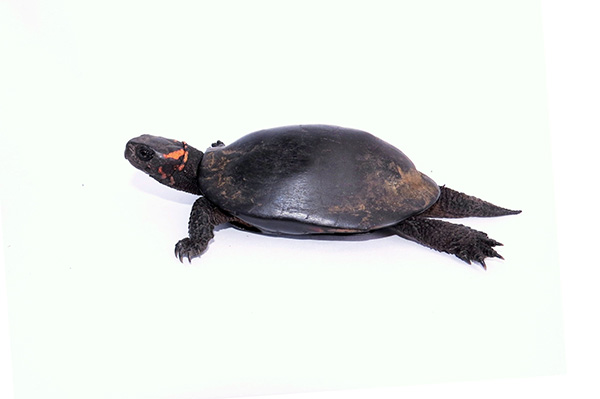 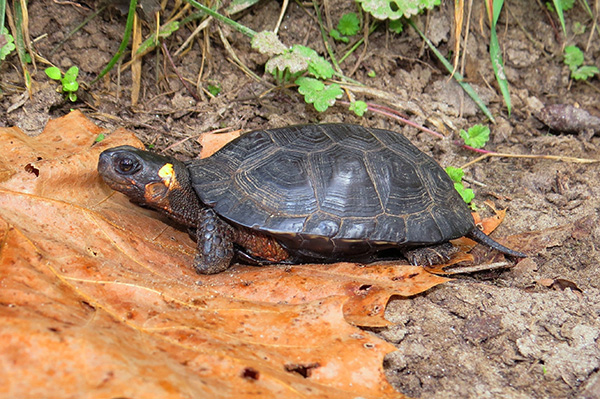 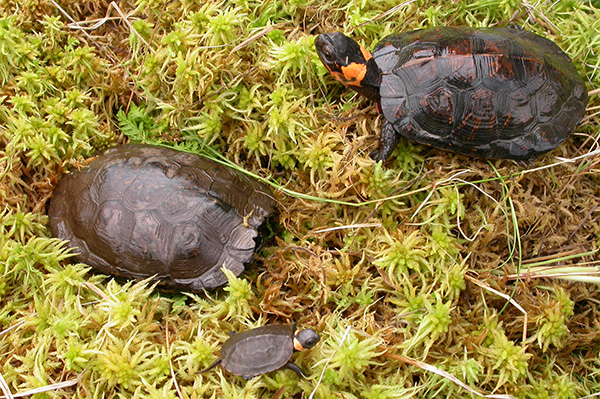 Bog turtles are omnivores. They prefer insects, snails, and other small animals. They are also known to eat carrion, berries, and seeds. 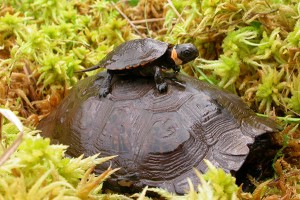 The bog turtle’s life span is estimated to be in excess of 40 years based on recapture studies. The secondary sexual characters of males (longer tail and concave plastron) begin to appear at around 2 1/2 inches in carapace length. Bog turtles in the wild are capable of reproducing around 7 years of age under the most ideal conditions, but the actual age
of first egg deposition is closer to 10 years. Reproduction may take place annually, but most likely occurs every second or third year. Female bog turtles may reproduce from 10 to 15 times over a 40 to 50 year life span. Egg clutch sizes range from 1-6 eggs with an average of 3 eggs per clutch. 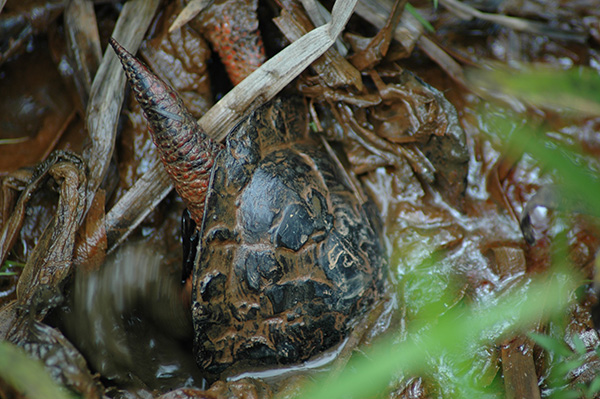 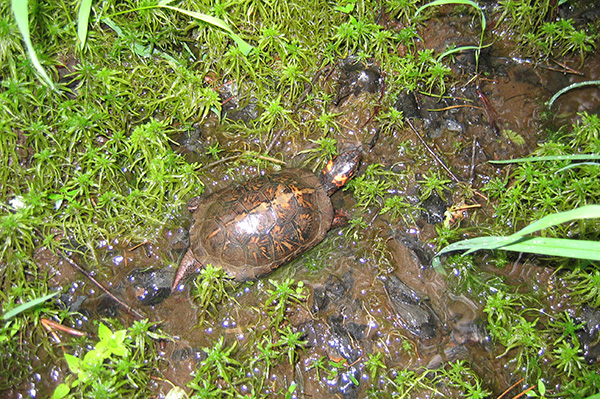 Bog turtles spend most of their time in wet mucky pockets at the base of small trees and shrubs in and around the roots, or exposed rock outcrops, or hiding in thick vegetation, making them very difficult to locate. Therefore, their population numbers are often hard to estimate.

Little is known about the dispersal or movement patterns of bog turtles. Individual bog turtles have been found crossing roads more than a mile, and in wetland habitats up to nearly 4 miles, from their wetland home.

These migratory movements take them into forested uplands, distant ridges, lowland valleys, and cultivated areas. Summer and early fall movements are sometimes long, bringing them into areas where their occurrence is unexpected. Bog turtles may exist in moderate to high densities in suitable habitats. Mark-and-recapture studies in the southern part of the bog turtle’s range indicate that suitable habitats have densities of 15 to 20 turtles per acre. Sex ratios in the bog turtle’s southern range average 1 male to 1.3 females per site.

The bog turtle is an ectothermic reptile (cold-blooded), and undergoes a definite annual cycle related to seasonal changes of temperatures in its environment. Bog turtles alternate seasonal warm-weather activity with cold-weather inactivity. Winter survival requires that bog turtles undergo a period of cold-weather dormancy through the winter. Winter dormancy is probably longer at higher elevations than in the Piedmont. Depending on the weather, bog turtles sometimes begin surface activity during mid-March in the South. The greatest bog turtle activities occur from mid-April through September. Elevation affects the timing and length of the major phases of the activity cycle. In the Piedmont, bog turtles have a longer active season than turtles in the higher mountain sites. 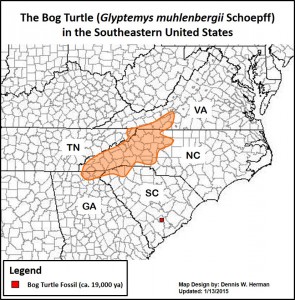 There is a Northeastern and a Southeastern population of bog turtles in the US. Southeastern bog turtles are known from Georgia, North Carolina, South Carolina, Tennessee, and Virginia in the southern part of their range. The majority of records are known from the Blue Ridge Intermountain Plateau, but many have been found in the upper Piedmont along the base of the Blue Ridge Escarpment. Elevations of bog turtle sites range from 710 to 4500 feet, with the majority known from 2000 to 3000 feet elevation. Bog turtle populations have been found along ten river basins in the Southeast in both the Mississippi-Ohio and Atlantic drainages.

In the Southeastern United States bog turtles have a very habitat specific limited range and the wetlands they inhabit are small and widely scattered. The estimated total population is believed to be between 4,000 and 6,000 individuals. This compares to a total population of 10,000 to 13,000 in the Northeast (MD to New England). The southern populations are mostly in the Appalachians where they are restricted to only about 100 active sites. The species is protected throughout its total range by state agencies and the US Fish and Wildlife Service. 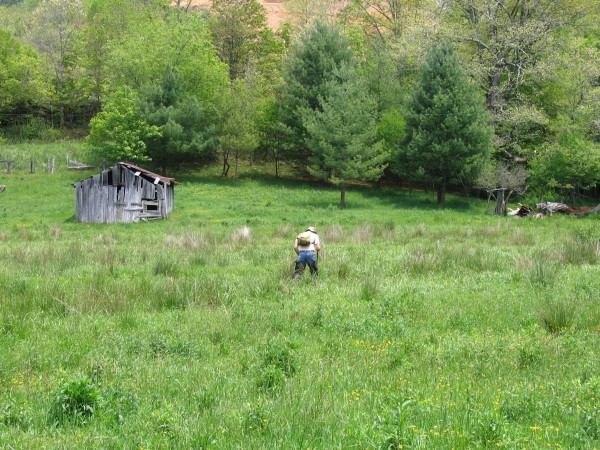 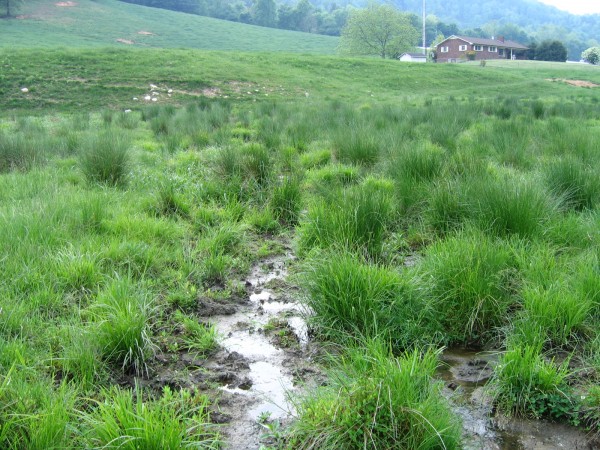 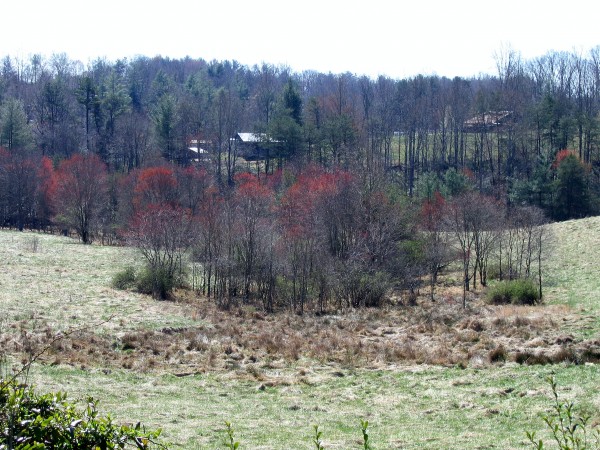 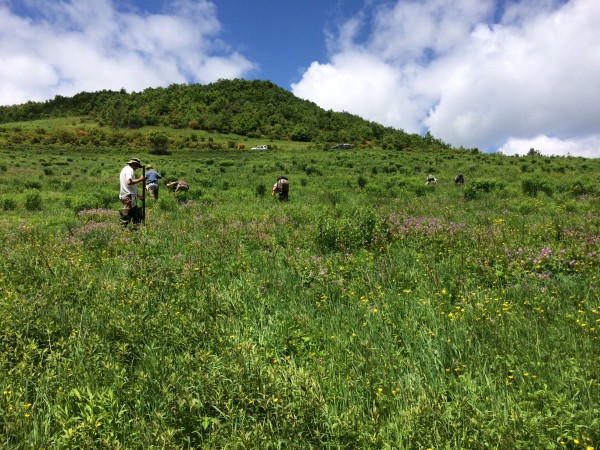 The wetlands preferred by bog turtles are spring-fed with saturated soils and modest amounts of running water. The sites do not have standing water of significant depth. Viable bog turtle populations occur in seepage slopes or terraces along headwaters of small to moderate size streams. Sites occupied by bog turtles are infrequently flooded, so they are not found on large, flat floodplains of major rivers or streams. Bog turtle habitat is characterized by being sedge-dominated, wet meadows with little or no canopy and are referred to as sedge meadows or Meadow Bogs. 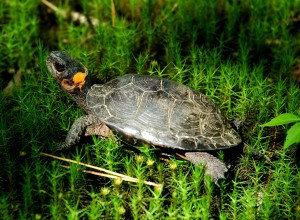 Technically speaking, the wetlands preferred by bog turtles are known as fens. To most ecologists a fen is a spring-fed wetland located over calcareous or mafic rock and enriched by nutrients, creating a wetland with great plant diversity. Only one such wetland has been described from the southern Mountains, although fens are common further north. Bog turtle habitats are, in fact, “poor or acidic” fens located over granite or metamorphic gneisses. These spring-fed wetlands are acidic with many floral components common to both true bogs and nutrient rich fens. Sphagnum, usually associated with acidic bogs, can be the dominant ground cover in many bog turtle habitats. Because of the acidic nature of these nutrient-poor fens and plant assemblages linked to true bogs, some ecologists refer to them as bogs. In fact, one rare natural community, the Southern Appalachian Bog, is so named because of these characteristics. Sedge meadows (also known as Meadow Bogs) area major component of these natural communities, and wetlands that have little or no sedge meadow habitat are inhabited by small populations of bog turtles or no turtles at all. The open nature of meadow bogs allows maximum sunlight to warm the herbaceous layer providing bog turtles with basking and nesting sites. One of the bog turtle’s ultimate limitations is a closed canopy, which cuts off surface light and warmth. 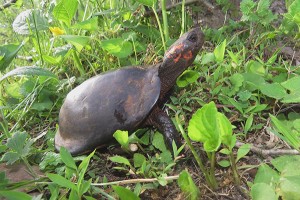 Bog turtles have been variously protected by every state in which they occur. The bog turtle is listed as “Threatened” in Georgia, North Carolina, South Carolina, and Tennessee, and “Endangered” in Virginia. Because of inconsistent state protection throughout the turtle’s range, the U.S. Fish and Wildlife Service placed the bog turtle on the Endangered Species list in November 1997. The bog turtle is listed as “Threatened” for the northern population (CT, DE, MA, MD, NJ, NY, and PA) and “threatened due to similarity of appearance” for the southern population (GA, NC, SC, TN, and VA); this designation is based on the naturally occurring 250-mile gap between the population in southern Virginia and that of Maryland. The southern bog turtle population is not fully protected under the Endangered Species Act (ESA), but may not be possessed, sold, traded, or collected. Landowners in the southern states can continue to develop bog turtle habitat by any legal means available to them, as long as the proper permits are obtained beforehand. In the northern states, bog turtles are fully protected under the ESA. 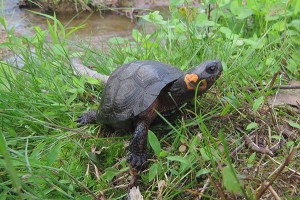 Wetlands inhabited by bog turtles are under constant threats from agricultural use, development, and natural succession. The illegal collecting of bog turtles for the pet trade, both domestic and international, directly threatens the turtle itself. These threats are having an adverse effect on bog turtle populations in the South, as well as throughout the turtle’s range. Habitat loss has accelerated over the past 20 years from fragmentation due to human encroachment and natural succession. The decline in bog turtle populations can be attributed directly to these threats.

Prior to European colonization in the 1700s, the dynamic wetlands used by bog turtles were a complex of habitat units and potential habitats interconnected by a mosaic of dispersal routes. The long-term dynamic ecosystem could withstand the loss of a single habitat unit while providing bog turtles with other usable habitats. The biological need for individual bog turtles to disperse takes them out of their wetlands to explore and locate new sites to colonize. Individual turtles could move freely up or down the corridor, enriching the gene pool and helping to maintain genetically healthy population units. Bog turtle habitat units or single population sites interconnected along a common stream corridor are referred to as metapopulations. Only a handful of these metapopulations remain today because
of habitat fragmentation. The most common types of fragmentation occur when streams are impounded to form lakes, highways are built across inhabited wetlands, and wetland habitat units are drained for agricultural use or development. Roads that bisect bog turtle wetlands are the single most detrimental threat to turtle populations. Highway mortality is high in areas where bog turtles must cross roads to get from one wetland to another.

Most of the metapopulations known today are fragmented, with great distances separating one population unit from the next. Bog turtles encounter impediments that make it difficult for dispersal to occur successfully. Some bog turtles have been found crossing ridges to locate wetlands in an adjacent valley. Overland dispersal may be more common than was previously thought, but it may also be a result of habitat unit losses along the stream corridor that turtles used historically. As mentioned previously, very few metapopulations remain in the South today. Bog turtle populations are dynamic, fluctuating and shifting over long time periods. The survival of the bog turtle depends on connected habitat units along riparian corridors or habitat patches in adjacent valleys where dispersal into them is not impeded.